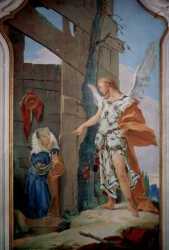 "Princess." The daughter of Terah, and the wife and half-sister of Abraham.1 Her name was originally Sarai, but the name Sarah was given to her at the time that it was announced to Abraham that she should be the mother of the promised child.2 During their sojourn in Egypt, Sarah passed herself off as Abraham's sister at his request.3 She was taken into Pharaoh's house, whereupon God inflicted him and his household with great plagues. Angered, Pharaoh banished Abraham and Sarai, and they went to live in Canaan.

Sarah remained childless and suggested Abraham take her Egyptian handmaiden Hagar as his second wife, and she bore him a son, Ishmael.4 Abraham was 86 at that time. When Abraham was 99 years old, God made a covenant with him and told him that he would bless Sarah with a child.5 That child was Isaac.6

On the day of Isaac's weaning they made a great feast. But when Sarah saw Hagar laughing, she said to Abraham, "Cast out this slave woman with her son, for the son of this slave woman shall not be heir with my son Isaac." Although Abraham was distressed because of his son Ishmael, he relented because God told him to do what his wife had asked.7

Sarah died at the age of 127 years and was buried at Machpelah, the Cave of the Patriarchs.8 Her story is from her marriage identified with that of the patriarch till the time of her death.