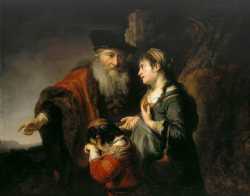 "Stranger." An Egyptian, Sarah's handmaid,1 whom she gave to Abraham as a secondary wife.2 When she was about to become a mother she fled from the cruelty of her mistress, intending apparently to return to her relatives in Egypt, through the desert of Shur, which lay between. Wearied and worn she had reached the place she distinguished by the name of Beer-lahai-roi ("the well of the visible God"), where the angel of Yahweh appeared to her. In obedience to the heavenly visitor she returned to the tent of Abraham, where her son Ishmael was born,3 and where she remained till after the birth of Isaac, the space of fourteen years.

Sarah after this began to vent her dissatisfaction both on Hagar and her child. Ishmael's conduct was insulting to Sarah, and she insisted that he and his mother should be dismissed. This was accordingly done, although with reluctance on the part of Abraham.4 They wandered out into the wilderness, where Ishmael, exhausted with his journey and faint from thirst, seemed about to die. Hagar "lifted up her voice and wept," and the angel of Yahweh, as before, appeared unto her, and she was comforted and delivered out of her distresses.5 Ishmael afterwards established himself in the wilderness of Paran, where he married an Egyptian.6

For other occurances of the name "Hagar", click here.