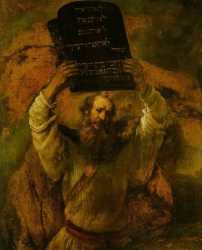 The tablets of the covenant, the two stone tablets on which were inscribed the Ten Commandments, the "testimony" or evidence of God's covenant with the people of Israel.

The first set, given to Moses on Mount Sinai, was inscribed by God on both sides, front and back. When Moses returned to the camp, he became enraged by the site of the people worshiping the Golden Calf, and he broke the tablets on the ground.1 At the command of God he chiseled out two stone tablets like the first ones, and took them up Mount Sinai, where God wrote on them "the words that were on the first tables."2 The tablets were placed in the ark of the covenant at Horeb.3