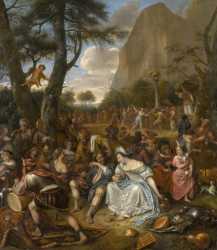 The worship of a golden calf was an ancient Egyptian custom which persisted in Jewish habits. According to the biblical account in Exodus, it was an idol cast at the foot of Mount Sinai from the jewelry of the Israelites by Aaron, brother of Moses, while Moses was on the mount. Later, when Moses accused him of sinning, Aaron explained that he had made the calf to satisfy the people's desire for visible objects to worship. In fury, Moses ordered the idol to be destroyed, burnt and ground into powder. The powder was scattered into water which the Israelites were compelled to drink. The tribe of Levi were the only ones who did not worship the golden calf, and sided with Moses.

Jeroboam I later set up similar objects of worship at the ancient towns of Bethel and Dan.1