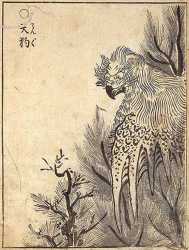 "heavenly dogs." In Japanese folk beliefs, a class of supernatural creatures. They belong to the yōkai class of demons and spirits. According to a later version of the Kujiji, they are the offspring of Ama-no-zako, who in turn was born from the storm god Susa-no-o.

The ten-gū were initially regarded in Buddhism as the harbingers of war, but they gradually turned into protective, albeit dangerous, mountain and forest spirits.

The ten-gū were initially depicted as large birds of prey, with both avian and human characteristics. Over time their beaks were humanized as unnaturally long noses.