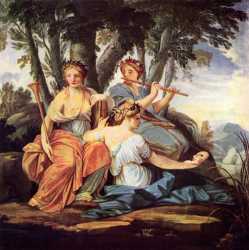 "Blooming." The Muse of comedy and pastoral poetry. She also favored rural persuits. Her attributes are a comic mask, a wreath of ivy, and a shepherd's crook. She became the mother of the Corybantes by Apollo.1

Thalia is portrayed with the comic mask in one hand and the sheperd's crook in the other.

For other occurances of the name "Thalia", click here.