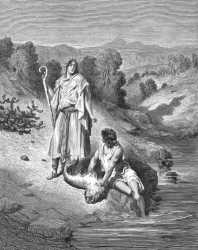 The son of Tobit. He is the protagonist of the Book of Tobit. His father sends him to Media to collect some money. He is accompanied by Raphael, who represents himself as Tobit's kinsman. With the help of Raphael he battles and exorcises a demon who haunts Sarah, a woman of Media. He later marries Sarah.

The Book of Tobit is included in the Roman Catholic Bible and the Protestant Apocrypha.