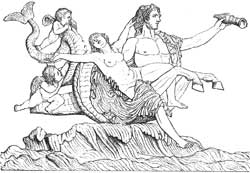 A son of Poseidon and Amphitrite (or Celaeno), who dwelt with his father and mother in a golden palace on the bottom of the sea, or according to Homer1 at Aegae.2 Later writers describe this divinity of the Mediterranean as riding over the sea on horses or other sea-monsters.3 Sometimes also Tritons are mentioned in the plural, and as serving other marine divinities in riding over the sea.

The appearance of Tritons is differently described, though they are always conceived as presenting the human figure in the upper part of their bodies, while the lower part is that of a fish. Pausanias4 says: "The Tritons have the following appearance. On their heads they grow hair like that of marsh frogs not only in color, but also in the impossibility of separating one hair from another. The rest of their body is rough with fine scales just as is the shark. Under their ears they have gills and a man's nose; but the mouth is broader and the teeth are those of a beast. Their eyes seem to me blue, and they have hands, fingers, and nails like the shells of the murex. Under the breast and belly is a tail like a dolphin's instead of feet."5

The chief characteristic of Tritons in poetry as well as in works of art is a trumpet consisting of a shell (concha), which the Tritons blow at the command of Poseidon, to soothe the restless waves of the sea,6 and in the fight of the Gigantes this trumpet served to frighten the enemies.7 Tritons were sometimes represented with two horse's feet instead of arms, and they were then called Centaur-Tritons or ichthyocentaurs.8 Their figures are frequently mentioned in works of art, as in the sanctuary of Poseidon on the Corinthian isthmus,9 in the temple of Dionysus at Tanagra,10 in the pediment of the temple of Saturn at Rome.11

Triton himself is depicted on many vases, reliefs, frescoes, and mosaics. Famous is the Triton of Bernini at Rome (piazza Barberini).

For other occurances of the name "Triton", click here.