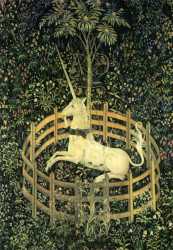 A mythical animal, depicted as a slender (white) horse with a spiraled horn growing from its forehead. The horn, if dipped in a liquid, will show it if contains poison. According to popular belief, unicorns can be only approached or caught by virgins.