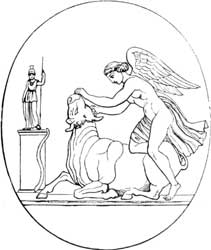 "Victory." The personification of victory among the Romans, as Nike was among the Greeks. Dionysius1 relates that Evander by the command of Minerva dedicated on the Palatine a temple of Victoria, the daughter of Pallas. On the site of this ancient temple a new one was built by L. Postumius, during the war with the Samnites; and M. Porcius Cato added to it a chapel of Victoria Virgo. In later times there existed three or four sanctuaries of Victory at Rome.