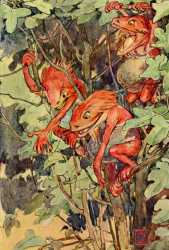 A strange little red man who stands about four feet high. The biggest parts of him are his head, his mouth, and his stomach. He has no teeth in his mouth and simply swallows his food, and can even swallow a grown man. His head is something like a snake's, and he open his mouth just as a snake does. The points of his fingers and the tips of his toes are cup-shaped, like the suckers of an octopus.

They live mostly in thick, leafy trees, and prefer the wild fig tree. They do not hunt for their food but simply pounce upon a person, and place their hands and feet upon the victim, draining his blood. The Yara-ma-yha-who does not try to suck all the blood from the body, but leaves sufficient to keep the victim alive while he walks round and gets an appetite. After he returns, he lies down on the ground, facing the victim, and crawls like a goanna, and opens his mouth wide, and sucks his prey into his mouth head first. He then rises and stands on his little legs, and dances round until the prey is well inside his stomach. Then he goes to a river or pool of water and drinks copious amounts of water, before falling asleep. When he wakes he vomits the remains of his recent meal. He will check several times to see if his prey is not feigning death by poking him with a stick and tickling him. If he gets no response and goes to sleep, the victim can use the opportunity to run away.

Should the Yara-ma-yha-who fail to check his victim, then the spirit of the wild fig tree would kill him by entering into his head through his ear, and causing a mumbling noise, ending with intense silence, so that the spirit would leave the rude body and become a cold fungus that grow upon the trees, and sheds a dull glow at night.

A person who is caught and swallowed by one of the red men become shorter with each capture, until he at last resembles a Yara-ma-yha-who.