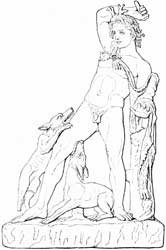 Son of Aristaeus and Autonoë, a daughter of Cadmus. He was trained in the art of hunting by the centaur Chiron, and was afterwards torn to pieces by his own fifty hounds on Mount Cithaeron. The names of these hounds are given by Ovid1 and Hyginus2 (see below).

The cause of this misfortune is differently stated: according to some accounts it was because he had seen Artemis while she was bathing in the vale of Gargaphia, on the discovery of which the goddess changed him into a stag, in which form he was torn to pieces by his own dogs.3 Others relate that he provoked the anger of the goddess by his boasting that he excelled her in hunting, or by his using for a feast the game which was destined as a sacrifice to her.4 A third account stated that he was killed by his dogs at the command of Zeus, because he sued for the hand of Semele.5

Pausanias6 saw near Orchomenos the rock on which Actaeon used to rest when he was fatigued by hunting, and from which he had seen Artemis in the bath; but he is of the opinion that the whole story arose from the circumstance that Actaeon was destroyed by his dogs in a natural fit of madness. Palaephatus7 gives an absurd and trivial explanation of it.

According to the Orchomenian tradition the rock of Actaeon was haunted by his specter, and the oracle of Delphi commanded the Orchomenians to bury the remains of the hero, which they might happen to find, and fix an iron image of him upon the rock. This image still existed in the time of Pausanias,8 and the Orchomenians offered annual sacrifices to Actaeon in that place. The manner in which Actaeon and his mother were painted by Polygnotus in the Lesche of Delphi, is described by Pausanias.9

Many Greek vases display Actaeon being attacked by dogs, such as on a krater in Boston (ca. 450 BCE). The same scene is found on a metope of the Hera temple at Selinus (first half of the fifth century BCE; Sicily) and on a late-Etruscan urn from Volterra (third-second century CE). More recent is the famous painting by Tiziano.