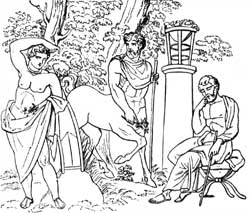 The wisest and justest of all the centaurs.1 He was the instructor of Achilles, whose father Peleus was a friend and relative of Chiron, and received at his wedding with Thetis the heavy lance which was subsequently used by Achilles.2

According to Apollodorus,3 Chiron was the son of Cronus and Philyra. He lived on Mount Pelion, from which he, like the other centaurs, was expelled by the Lapiths; but sacrifices were offered to him there by the Magnesians until a very late period, and the family of the Chironidae in that neighborhood, who were distinguished for their knowledge of medicine, were regarded as his descendants.4 Chiron himself had been instructed by Apollo and Artemis, and was renowned for his skill in hunting, medicine, music, gymnastics, and the art of prophecy.5

All the most distinguished heroes of Grecian story are, like Achilles, described as the pupils of Chiron in these arts. His friendship with Peleus, who was his grandson, is particularly celebrated. Chiron saved him from the hands of the other centaurs, who were on the point of killing him, and he also restored to him the sword which Acastus had concealed.6 Chiron further informed him in what manner he might gain possession of Thetis, who was doomed to marry a mortal. He is also connected with the story of the Argonauts, whom he received kindly when they came to his residence on their voyage, for many of the heroes were his friends and pupils.7 Heracles too was connected with him by friendship; but one of the poisoned arrows of this hero was nevertheless the cause of his death, for during his struggle with the Erymanthian boar, Heracles became involved in a fight with the centaurs, who fled to Chiron, in the neighborhood of Malea. Heracles shot at them, and one of his arrows struck Chiron, who, although immortal, would not live any longer, and gave his immortality to Prometheus. According to others, Chiron, in looking at one of the arrows, dropped it on his foot, and wounded himself.8 Zeus placed Chiron among the stars. He had been married to Nais or Chariclo, and his daughter Endeïs was the mother of Peleus.9

Chiron is the noblest specimen of a combination of the human and animal forms in the ancient works of art; for while the centaurs generally express the sensual and savage features of a man combined with the strength and swiftness of a horse, Chiron, who possesses the latter likewise, combines with it a mild wisdom. He was represented on the Amyclaean throne of Apollo, and on the chest of Cypselus.10 Some representations of him are still extant, in which young Achilles or Erotes are riding on his back, such as a mural at the Basilica of Herculaneum.11 He was usually depicted with the full body of a man, wearing a robe and boots, and with a horse's body attached behind. This differs with the normal representations of Centaurs, who are not clothed, have only the upper torso of a man and are fully equine below the waist.