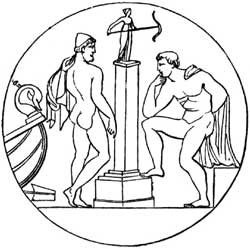 A son of Nausithous, and grandson of Poseidon. His name is celebrated in the story of the Argonauts, and still more in that of the wanderings of Odysseus. In the former Alcinous is represented as living with his queen Arete in the island of Drepane. The Argonauts, on their return from Colchis, came to his island, and were most hospitably received. When the Colchians, in their pursuit of the Argonauts, likewise arrived in Drepane, and demanded that Medea should be delivered up to them, Alcinous declared that if she was still a maiden she should he restored to them, but if she was already the wife of Jason, he would protect her and her husband against the Colchians. The Colchians were obliged, by the contrivance of Arete, to depart without their princess, and the Argonauts continued their voyage homewards, after they had received munificent presents from Alcinous.1

According to Homer, Alcinous is the happy ruler of the Phaeacians in the island of Scheria, who has by Arete five sons and one daughter, Nausicaa.2 The description of his palace and his dominions, the mode in which Odysseus is received, the entertainments given to him, and the stories he related to the king about his own wanderings, occupy a considerable portion of the Odyssey (from book vi to xiii), and form one of its most charming parts.3

For other occurances of the name "Alcinous", click here.