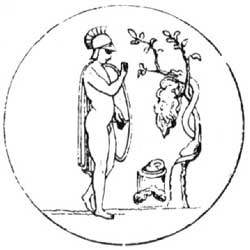 That is, the healer or atoner, a name which the hero was said to have received from Chiron, his instructor, having before been called Diomedes.1 The chief exploits of this hero are related in the article Argonauts, and we therefore confine ourselves now to his personal history.

According to the common tradition, he was a son of Aeson and Polymede, and belonged to the family of the Aeolidae at Iolcus. The name of his mother, however, is different in the different writers, either Polymele,2 Amphinome,3Alcimede,4 Polypheme,5 Arne or Scarphe,6 or Rhoeo.7 After the death of Cretheus, the founder of Iolcus and father of Aeson, Pelias, the nephew, or, according to others, a brother of Jason, ruled at Iolcus. Pelias was told by an oracle that he should be killed by a descendant of Aeolus, and therefore put to death all the Aeolidae; but Jason, whose grandfather, Cretheus, had been the eldest son of Aeolus, and who was on that account likewise destined to die, was saved by his own relatives, who lamented over him as though he were dead, and entrusted him to Chiron to be educated.8

Pelias was now advised by an oracle to be on his guard against a man with only one shoe. Once when Pelias offered up a sacrifice to Poseidon, he invited among others Jason. The latter arrived with only one sandal, having lost the other in crossing the river Anaurus, on the banks of which he lived as a peasant. Another tradition represents Jason as coming in Magnesian costume from Mount Pelion.9 Instead of the river Anaurus, others mention the Evenus or Enipeus, and it is added that Hera, being in love with Jason, assumed the appearance of an old woman, and standing on the bank of the river, requested him to carry her across, and that Jason in so doing lost one of his sandals.10 Others again relate that Jason, uninvited by Pelias, came from Mount Pelion to Iolcus, found his aged father Aeson still alive, and demanded the throne of Pelias, who had usurped it, or had undertaken the government as the guardian of Jason.11

Pelias consented to surrender the throne, but demanded of Jason to remove the curse which rested on the family of the Aeolidae, by fetching the golden fleece, and soothing the spirit of Phrixus.12 The common story, however, goes on to say that on the arrival of Jason at Iolcus, Pelias remembered the oracle about the man with one shoe, and asked Jason what he would do if he were told by an oracle that he should be killed by one of his subjects? Jason, on the suggestion of Hera, who hated Pelias, answered, that he would send him out to fetch the golden fleece. Pelias accordingly ordered Jason to fetch the golden fleece, which was in the possession of king Aeëtes in Colchis, and was guarded by an ever-watchful dragon.

At the request of Jason, Argus, a son of Phrixus or Arestor, built the ship Argo, and the principal heroes of Greece being invited to join the expedition, Jason and his companions embarked at Iolcus. They first landed in Lemnos, which was governed by Hypsipyle, by whom Jason became the father of Euneus and Nebrophonus (or, as others call him, Deiphilus, or Thoas13). After many adventures, Jason and his companions arrived in Colchis, the kingdom of Aeëtes. While Jason was meditating upon the manner in which he might fulfill the conditions under which Aeëtes had promised to surrender the golden fleece, the sorceress Medea, the daughter of Aeëtes and Idyia, fell in love with him, and from fear lest he should be killed by the brazen-footed and fire-breathing bulls whom Jason was to yoke to a plow, she promised to assist him, and surrender the fleece to him, if he would take an oath that he would make her his wife, and take her to Greece. When Jason promised to do so, Medea gave him an ointment, with which he was to anoint his body, shield and spear, and which was to make him for one day invulnerable by fire and iron. She further informed him, that from the teeth of the dragon which he was to sow in the field plowed with the above-mentioned bull, armed men would rise against him, and she commanded him to throw stones among them, adding, that as they would light about those stones, they would destroy one another, or it would be easy for him to destroy them (cp. Spartae).

Jason now succeeded in doing as he was bid by Aeëtes, but the latter, nevertheless, refused giving up the golden fleece, for he had formed the secret plan of burning the ship Argo, and destroying the Argonauts. But Medea prevented this, and in the night she conducted her beloved to the fleece, sent the dragon to sleep, and having taken possession of the fleece, she embarked with Jason in the ship Argo. Her brother Absyrtus accompanied them. According to some, Jason, previous to his departure, fought with Aeëtes, and killed him, and Jason, who was wounded, was cured by Medea.14 But, according to the common story, Aeëtes pursued the fugitives, and as he was near overtaking them, Medea killed her brother Absyrtus, and scattered the parts of his body into the sea as she fled. The collecting of these scattered limbs detained Aeëtes; Jason and Medea thus escaped, and Aeëtes buried the collected limbs of Absyrtus in a place which was hence called Tomi (pieces, from τέμνω).15 The Argonauts were subsequently purified by Circe from the murder of Absyrtus.

When they arrived in the island of the Phaeacians, the Colchians who had been sent out in their pursuit overtook them, and demanded the surrender of Medea. Alcinous promised to give her up, in case of her not being actually married to Jason, and Arete, the wife of Alcinous, contrived to hurry the marriage, in order to avoid the necessity of surrendering Medea. At length Jason and Medea arrived at Iolcus. According to Ovid,16 Jason found his aged father Aeson still alive, and Medea made him young again; but according to the common tradition, Pelias, not believing that the Argonauts would ever return, had in the mean time resolved to kill Aeson. But the latter begged to be permitted to put an end to his own life, drank the blood of a bull which he sacrificed, and thus died.

Jason's mother cursed Pelias for this crime, and made away with herself;17 and Pelias killed her surviving young son Promachus. After the perpetration of these crimes Jason arrived, and delivered the fleece to Pelias. He then dedicated the ship Argo to Poseidon on the Isthmus, and called upon Medea to take vengeance on Pelias. Medea prevailed on the daughters of Pelias to cut their father to pieces and boil them, pretending that thereby they would restore him to youth and vigor, as she had before changed a ram into a lamb, by boiling the dissected parts of his body in a cauldron. But Pelias remained dead, and his son Acastus expelled Jason and Medea from Iolcus. According to other traditions, Jason, after having taken vengeance on Pelias, spared the other members of the family, and even raised Acastus to the throne.18

The earliest legends do not mention Jason's expulsion from Iolcus, for Hesiod19 simply relates that Jason returned to Iolcus, and became by Medea the father of Medeius, who was educated by Chiron on the neighboring Pelion. But according to the common account, Jason and Medea went from Iolcus to Corinth, where they lived happy for a period of ten years, until Creon, king of Corinth, betrothed his daughter Glauce to Jason, and thus led him to desert Medea. Medea invoked the gods by whom Jason had sworn to be faithful to her, and sent to Glauce a poisoned garment and diadem. When the latter put on the garment, she, together with her father, was consumed by the poisonous fire that issued from the vestment. Medea also killed her children by Jason, viz. Mermerus and Pheres, and then fled in a chariot drawn by winged dragons, the gift of Helios, to Athens. Her younger children she placed, previous to her flight, as suppliants on the altar of Hera Acraea, but the Corinthians took them away and put them to death.20

According to Diodorus,21 Medea set the royal palace at Corinth on fire, in which Creon and Glauce were burnt, but Jason escaped; further, she had three sons, Thessalus, Alcimenes, and Thersander, the two last of whom were killed, whereas Thessalus, who escaped, afterwards became the ruler of Iolcus. Medea herself first escaped to Thebes, where she cured Heracles, and afterwards to Athens. The earliest accounts we have do not mention Medea's murder of her children, but represent her as a priestess at Corinth, where she was killed by the Corinthians;22 and Pausanias23 relates, that after the death of Corinthus, Medea was invited from Iolcus, and ruled over Corinth, as her lawful paternal inheritance, in conjunction with Jason. Medea concealed her children in the temple of Hera, hoping thereby to make them immortal; but Jason, indignant at this conduct, deserted her, and returned to Iolcus, whereupon Medea also quitted Corinth, leaving the government to Sisyphus.

Jason is also mentioned among the Calydonian Hunters;24 and it is further stated, that he and the Dioscuri joined Peleus, for the purpose of assisting him in taking vengeance on Astydameia, the wife of Acastus, and conquered and destroyed Iolcus.25

Later writers represent Jason as having in the end become reconciled to Medea, as having returned with her to Colchis, and as having there restored Aeëtes to his kingdom, of which he had been deprived.26 The death of Jason is also related differently; for, according to some, he made away with himself from grief,27 and, according to others, he was crushed by the poop of the ship Argo, under which he laid down on the advice of Medea, and which fell upon him.28

He was worshiped as a hero in several parts of the ancient world:29 his marriage with Medea was represented on the chest of Cypselus.30

A red-figure Attic bowl, painted in the style of Duris (ca. 480 BCE), depicts Jason while he -- protected by Athena -- emerges from the mouth of a dragon. The golden fleece hangs from a tree in the background. A Pompeian fresco (Casa degli Amorini Dorati) depicts Jason before Pelias.

For other occurances of the name "Jason", click here.