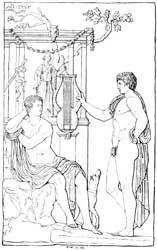 A son of Zeus and Antiope, the daughter of Nycteus of Thebes, and twin-brother of Zethus.1 When Antiope was with child by the father of the gods, fear of her own father induced her to flee to Epopeus at Sicyon, whom she married. Nycteus killed himself in despair, but charged his brother Lycus to avenge him on Epopeus and Antiope. Lycus accordingly marched against Sicyon, took the town, slew Epopeus, and carried Antiope with him to Eleutherae in Boeotia. During her imprisonment there she gave birth to two sons, Amphion and Zethus, who were exposed, but found and brought up by shepherds.2

According to Hyginus,3 Antiope was the wife of Lycus, and was seduced by Epopeus. Hereupon she was repudiated by her husband, and it was not until after this event that she was visited by Zeus. Dirce, the second wife of Lycus, was jealous of Antiope, and had her put in chains; but Zeus helped her in escaping to Mount Cithaeron, where she gave birth to her two sons. According to Apollodorus, she remained in captivity for a long time after the birth of her sons, who grew up among the shepherds, and did not know their descent. Hermes (according to others, Apollo, or the Muses) gave Amphion a lyre, who henceforth practiced song and music, while his brother spent his time in hunting and tending the flocks.4 The two brothers, whom Euripides5 calls "the Dioscuri with white horses," fortified the town of Entresis near Thespiae, and settled there.6

Antiope, who had in the meantime been very ill-treated by Lycus and Dirce, escaped from her prison, her chains having miraculously been loosened; and her sons, on recognizing their mother, went to Thebes, killed Lycus, tied Dirce to a bull, and had her dragged about till she too was killed, and then threw her body into a well, which was from this time called the well of Dirce.

After having taken possession of Thebes, the two brothers fortified the town by a wall, the reasons for which are differently stated. It is said, that when Amphion played his lyre, the stones not only moved of their own accord to the place where they were wanted, but fitted themselves together so as to form the wall.7 Amphion afterwards married Niobe who bore him many sons and daughters, all of whom were killed by Apollo.8 As regards the death of Amphion, Ovid9 relates, that he killed himself with a sword from grief at the loss of his children. According to others, he was killed by Apollo because he made an assault on the Pythian temple of the god.10

Amphion was buried together with his brother at Thebes (or, according to Stephanus Byzantius, s.v. Tithoraia, at Tithoraea), and the Tithoraeans believed, that they could make their own fields more fruitful by taking, at a certain time of the year, from Amphion's grave a piece of earth, and putting it on the grave of Antiope. For this reason the Thebans watched the grave of Amphion at that particular season.11

In Hades Amphion was punished for his conduct towards Leto.12 The following passages may also be compared: Pausanias. Description of Greece ii, 6.2; vi, 20.8; Propertius, iii, 13.29.

The brothers Amphion and Zethus are portrayed on an Etruscan mirror (sixth century BCE). The punishment inflicted by Amphion and his brother upon Dirce is represented in one of the finest works of art still extant -- the celebrated Farnesian bull, the work of Apollonius and Tauriscus (ca. 150 BCE), which was discovered in 1546, and placed in the palace Farnese at Rome13 (presently at the National Archaeological Museum of Naples).

For other occurances of the name "Amphion", click here.