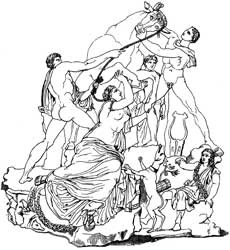 A daughter of Nycteus and Polyxo,1 or of the river god Asopus in Boeotia.2 She became by Zeus the mother of Amphion and Zethus. Dionysus threw her into a state of madness on account of the vengeance which her sons had taken on Dirce. In this condition she wandered about through Greece, until Phocus, the grandson of Sisyphus, cured and married her. She was buried with Phocus in one common tomb.3

Antiope and Zeus, in the shape of a satyr, are portrayed on an Etruscan mirror and on Greek vases, among which a red-colored skyphos (fifth century BCE). A statue of Antiope could be found in the temple of Aphrodite at Sicyon. More recent is the sleeping Antiope by Correggio.

For other occurances of the name "Antiope", click here.