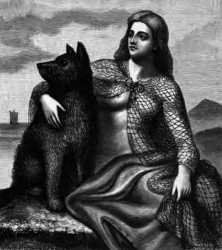 The daughter of the legendary heroic couple Sigurðr and Brynhildr. She was raised by Brynhildr's maternal uncle Heimir in Hlymdalir. After her parents' death Heimir feared for her life and constructed a large harp in which to hide the girl. Disguised as a poor harp player he traveled the country.

During a stay in Norway, Heimir was murdered in his sleep because the owners of the house, Áke and Grima, believed the harp contained precious items. When the couple opened the harp they discovered Áslaug instead. They decided to raise the girl as their own, calling her Kráka ("Crow"), and forced her to wear dirty clothes in order to hide her noble origins.

Years later she met, and married, the legendary hero Ragnarr Loðbrók and bore him several sons: Ivar the Boneless, Hvitserk, Ragnvald the Mountain-High, and Sigurd Snake-in-the-Eye.

During a visit to Sweden, viceroy Eysteinn Beli convinced Ragnarr to marry the Swedish princess Ingeborg and to reject Kráka. At that time, three birds approached Kráka and informed her of Ragnarr's intentions. When he returned to her she revealed her true noble origins and to prove this she said she would give birth to a child whose eye would bear the image of a serpent (a reference to father's slaying of Fáfnir). This son was Sigurd Snake-in-the-Eye.