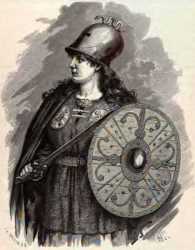 A valkyrie and a shieldmaiden, the daughter of Buðli and sister of Atli. She is known as Sigrdrífa in the eddic poem Sigrdrífumál.

Her story is told in Völsunga saga. After his slaying of the dragon Fáfnir, Sigurðr came upon a skjaldborg, or shield wall. He entered it and found inside a warrior lying asleep, completely armed. He took the helmet off the warrior's head, and saw that it was a woman. Then he cut off her chainmail armor with his sword Gramr, and she awoke. She told him that two kings had made war on each other and that Odin had promised victory to one of them, Hjálmgunnar. She overcame him in battle and in revenge Odin pricked her with a sleep-thorn and declared that from then on she should never have victory in battle, and should be given in marriage. She swore that she would never wed one who knew the name of fear. Sigurðr and Brynhildr share a love potion, and then she taught him the runes and provided him with council. Before he left they swore oaths that they would be together.

In Völsunga saga, chapter 24, they met again at Hlymdale, the home of Heimir, Brynhildr's father-in-law. Sigurðr declared his love for her, gave her a gold ring, and they swore oath anew. After Sigurðr's departure, Brynhildr was visited by Guðrún to help interpret a dream.

Sigurðr continued his journey and came to the dwelling of Gjúki. Grímhildr, Gjúki's wife, thought how well it would be if Sigurðr wedded their daughter Guðrún. She gave him a drinking horn, and as he drank, Sigurðr forgot both his love and his vows to Brynhildr. After Sigurðr and Guðrún were married, Grímhildr encouraged her son Gunnarr to woo Brynhildr.

Sigurðr and Gunnarr rode up to Hlymdale and from there to Brynhildr's hall, which was surrounded by flames. Gunnarr's horse refused to pass through the flames so Gunnarr and Sigurðr changed semblance, as Grímhildr had taught them. Sigurðr mounted his horse and rode through the flames into the hall. He identified himself as Gunnarr and said that he had come to claim her as his wife. He tarried there for three nights, and they lay in one bed together, but with the sword Gramr between them. He took from Brynhildr the ring Andvaranaut and gave her another ring from Fáfnir's hoard. Brynhildr told her stepfather Heimir the news and asked him to raise Áslaug, her child with Sigurðr. Thus Brynhildr wedded Gunnarr.

One day as Brynhildr and Guðrún went to the river to bathe, Brynhildr waded the farthest out into the river. Guðrún asked what this might signify, and Brynhildr said that her father was mightier and that her husband was more famous. Guðrún became angry and told Brynhildr that it was Sigurðr who had passed through her flames and lay by her side. As proof she showed her Andvaranaut, and Brynhildr knew it was true.

Sigurðr remembered his oath to her and tried to console her, saying how they both had been deceived. He offered to marry her and divorce Guðrún, but she would not listen to him, and swore revenge. She tried to persuade her husband Gunnarr to kill Sigurðr, but he was bound to Sigurðr by oath. He conversed with his brother Högni and they came up with the plan to incite their half-brother Guthormr to carry out the murder. And so Sigurðr was slain. Brynhildr heard Guðrún lamenting the death of her husband and laughed. She then had Sigurðr's three-year-old son slain.

Afterwards Brynhildr killed herself by thrusting a sword under her armpit. As she lay dying she asked one last boon of Gunnarr: to prepare a great pyre for herself, Sigurðr, his son, and Guthormr. After it was set afire she was borne onto the pyre; and then she died, and was burned there by the side of Sigurðr.

According to Helreið Brynhildar, two piles were made, one for Sigurðr, which was burned first, but Brynhildr was burned afterwards and she was in a chariot. It was said that she drove in a chariot on the way to Hel, and passed through a place in which a giantess dwelt.

In the older (and the original South Germanic) version, Sigurðr arrived at Gjúki's dwelling before he has ever heard of Brynhildr. Their first encounter is when he has changed shape with Gunnarr and goes to woo her for the latter.