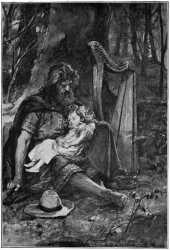 A mighty chief who dwelt at Hlymdalir. He was the maternal uncle of Brynhildr, and husband of Brynhildr's sister Bekkhildr. Their son is Alsviðr, the most courteous of men. Brynhildr placed Áslaug, her daughter by Sigurðr in his charge, before going to become Gunnarr's wife. After the death of Brynhildr and Sigurðr, Heimir feared for Áslaug's life and constructed a large harp in which to hide the girl. Disguised as a poor harp player he traveled the country. While in Norway he was murdered in his sleep by the owners of a house they were staying because they believed that the harp contained precious items.

Heimir and Bekkhildr seem to be a northern invention; neither of them is mentioned in any of the earlier poems.