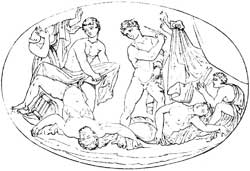 The daughter Tyndareus and Leda. She was the wife of Agamemnon and was by him the mother of Chrysothemis, Electra, Iphigeneia, and Orestes. During her husband's long absence at Troy she was engaged in an adulterous affair with Aegisthus. The couple murdered Agamemnon upon his return from Troy, and together they ruled over Mycenae and Argos until Orestes avenged his father's death and killed his mother.