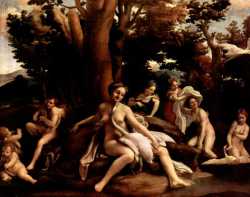 A daughter of Thestius, whence she is called Thestias;1 but others call her a daughter of Thespius, Thyestes, or Glaucus, by Laophonte, Deidamea, Leucippe, Eurythemis, or Paneidyia.2 She was the wife of Tyndareus, by whom she became the mother of Timandra, Clytemnestra, and Philonoe.3 One night she was embraced both by her husband and by Zeus, and by the former she became the mother of Castor and Clytemnestra, and by the latter of Polydeuces and Helen.4 According to Homer5 both Castor and Polydeuces were sons of Tyndareus and Leda, while Helen is described as a daughter of Zeus.6 Other traditions reverse the story, making Castor and Polydeuces the sons of Zeus, and Helen the daughter of Tyndareus.7

According to the common legend Zeus visited Leda in the disguise of a swan, and she produced two eggs, from the one of which issued Helen, and from the other Castor and Polydeuces.8 The visit of Zeus to Leda in the form of a swan was frequently represented by ancient artists. It should be observed that Phoebe is also mentioned as a daughter of Tyndareus and Leda,9 and that, according to Lactantius,10 Leda was after her death raised to the rank of a divinity, under the name of Nemesis.

Leda and the swan was a popular subject with the ancient artists, among whom Timotheus, one of the sculptors of the Mausoleum (fourth century BCE). In Hellenic times, Leda is frequently portrayed with the swan close to her body, such as on gem stones, reliefs, and on murals at Pompeii (at the Casa dei Vettii and the Casa della Regine Margherita).
Later works include those by Leonardo da Vinci, Michelangelo, Falconet, Moreau, and Vieria. These paintings often include the children from her union with Zeus.