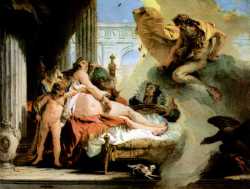 Danaë was the daughter of king Acrisius and Eurydice or Aganippe. An oracle warned Acrisius that Danaë's son would someday kill him, so Acrisius shut Danaë in a bronze room, away from all male company. However, Zeus conceived a passion for Danaë, and came to her through the roof, in the form of a shower of gold that poured down into her lap; as a result she had a son, Perseus.

When Acrisius discovered Perseus, he locked both mother and son in a chest, and set it adrift on the sea. The chest came ashore at Seriphus, where Danaë and Perseus were welcomed. Later, king Polydectes of Seriphus fell in love with Danaë and tried to force himself on her; he was eventually killed by Perseus.

According to another story, Danaë went to Italy, built the town of Ardea, and married Pilumnus, by whom she became the mother of Daunus, the ancestor of Turnus.1

Danaë is also called Acrisioneis, after her father.2

The saga of Danaë is portrayed on Greek red-figure vases, on gem stones, and on Pompeian murals, for instance at the Casa dei Vettii and the Casa dell Regina Margheritta. Renaissance and baroque painters, among which Tiziano, Correggio and possibly Rembrandt, used the theme as well.