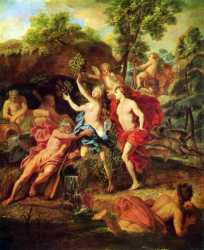 "Laurel." A fair maiden who is mixed up with various traditions about Apollo. According to Pausanias1 she was an oread and an ancient priestess of the Delphic oracle to which she had been appointed by Gaea. Diodorus2 describes her as the daughter of Tiresias, who is better known by the name of Manto. She was made prisoner in the war of the Epigoni and given as a present to Apollo. A third Daphne is called a daughter of the river god Ladon in Arcadia by Gaea,3 or of the river god Peneus in Thessaly,4 or lastly of Amyclas.5

She was extremely beautiful and was loved and pursued by Apollo. When on the point of being overtaken by him, she prayed to her mother, Gaea, who opened the earth and received her, and in order to console Apollo she created the ever-green laurel-tree (δάφνη), of the boughs of which Apollo made himself a wreath.

Another story relates that Leucippus, the son of Oenomaus, king of Pisa, was in love with Daphne and approached her in the disguise of a maiden and thus hunted with her. But Apollo's jealousy caused his discovery during the bath, and he was killed by the nymphs.6 According to Ovid7 Daphne in her flight from Apollo was metamorphosed herself into a laurel-tree.

The metamorphoses of Daphne can be found depicted on a mural at the Casa dei Vettii at Pompeii. Famous are the sculptures of Apollo and Daphne by Bernini.