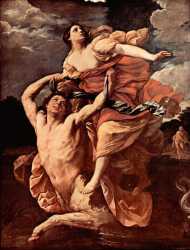 "Man-slayer." A daughter of Althaea by Oeneus, Dionysus, or Dexamenus,1 and a sister of Meleager. When Meleager died, his sisters lamented his death at his grave; Artemis in her anger touched them with her staff, and changed them into birds, with the exception of Deianeira and Gorge, who were allowed, by the solicitation of Dionysus, to retain their human forms.2 She was loved by both Achelous and Heracles, the latter having learned of her in the underworld from the shade of her brother. They fought for the possession of her, but Heracles was victorious and thus Deianeira became his wife.

After Heracles accidentally killed Eunomus, the son of Architeles, they went into exile. On their road they came to the river Euenus in Aetolia, across which the centaur Nessus used to carry travelers for a small sum of money. Heracles himself forded the river, and gave Deianeira to Nessus to carry her across. Nessus attempted to violate or abduct her: Heracles heard her screaming, and as the centaur brought her to the other side, Heracles shot an arrow into his heart. The dying centaur called out to Deianeira to take his blood with her, because it would act as a potent love-charm should she ever need it.

Later, after an expedition against Oechalia, Heracles captured him Iole, whom he loved. On his return home he landed at Cenaeum and erected an altar to Zeus Cenaeus, and sent his companion, Lichas, to Trachis to fetch him a white garment, which he intended to use during the sacrifice. Deianeira, who heard from Lichas respecting Iole, began to fear lest the maiden should supplant her in the affection of her husband. To prevent this she steeped the white garment he had demanded in the preparation she had made from the blood of Nessus.

When Heracles donned the garment, the poison which was contained in the ointment, and which had came from the poisoned arrow with which Heracles had killed Nessus, penetrated into all parts of his body, and caused him the most fearful pains, eventually leading to his death.

Deianeira, on learning what she had unwittingly done, hanged herself.

Many Greek vases show Deianeira being rescued by Heracles from Nessus. She is depicted seated on the back of the Centaur, standing beside him, or running from him. Guido Reni painted the abduction of Deianeira by Nessus.

For other occurances of the name "Deianeira", click here.