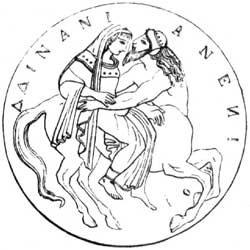 A centaur who attempted to violate Deianeira, the wife of Heracles, during their crossing of the mountain stream Euenus in Aetolia, when Heracles allowed him to carry her. Angered, Heracles killed him but before he died, Nessus prepared his revenge; he told Deianeira to gather some of his blood, telling her that it had magical properties and would ensure Heracles' love for her.

When Deianeira used the blood many years later she unwittingly brought about Heracles' terrible death.

On Greek vases Nessus is depicted as a Centaur holding a sword and a club, later with bow and arrow, such as on a Roman mosaic at Madrid. The so-called Nessus amphora, a proto-Attic vase (ca. 630 BCE), shows in late-geometric style the encounter between Heracles and Nessus (Metropolitan Museum, New York). A similar amphora from the same era is located in Athens. Renaissance and baroque painters such as Pollaiuolo, Veronese, and Bologna often used Nessus as a subject.

For other occurances of the name "Nessus", click here.