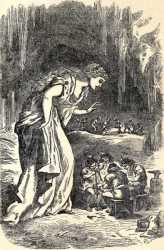 "Dawdle", "Delayed." The name appears in a number of other poems of the Poetic Edda as that of a dwarf.

In Hávamál, Dvalinn seems to have given magic runes to the dwarfs, probably accounting for their skill in craftsmanship. In Alvíssmál, the Sun is called The Deceiver of Dvalinn, because he, like the other dwarfs living underground, cannot live in its light; the sun's rays apparently have the power to turn them to stone. Another kenning for the Sun is Dvalinn's Playmate.

In Fáfnismál and Gylfaginning it is said that there are many Norns, some of whom are Dvalinn's daughters, probably meaning that they are of dwarf-kind:

Of many births the Norns must be,
Nor one in race they were
Some to gods, others to elves are kin,
And Dvalin's daughters some.

In the short narrative Sörla þáttr, Dvalinn is one of four dwarfs who made a beautiful gold necklace. Freyja desired this necklace but they would only give it to her if she agreed to spend one night with each of them, which she did. In Hervarar saga ok Heiðreks, Dvalinn and Durinn made the sword Tyrfing for king Sigrlami.

A kenning for poetry is Drink of Dvalinn, as the Icelandic skald Ormr Steinþórsson sang:

The body of the dame
And my dead be borne
Into one hall; the Drink
Of Dvalinn, Franklins, hear.

For other occurances of the name "Dvalinn", click here.