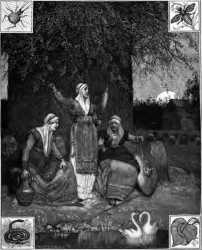 The Norse demigoddesses who allot life and determine man's destiny. The norns are represented as three beings: Urðr ("Became"), Verðandi ("Becoming"), and Skuld ("Is-to-be"), the youngest; thus they cover the past, the present, and the future. They are mentioned in Völuspá:

Thence come maidens,
much knowing,
three from the hall,
which under that tree stands;
Urd hight the one,
the second Verdandi,
on a tablet they graved
Skuld the third.
Laws they established,
life allotted
to the sons of men;
destinies pronounced.

The norns are further described in Gylfaginning, where Snorri Sturluson paraphrases Völuspá:

A hall stands there, fair, under the ash by the well, and out of that hall come three maids, who are called thus: Urdr, Verdandi, Skuld; these maids determine the period of men's lives: we call them Norns; but there are many norns: those who come to each child that is born, to appoint his life; these are of the race of the gods, but the second are of the Elf-people, and the third are of the kindred of the dwarves.

Snorri then quotes a stanza from Fáfnismál, in which the dying Fáfnir tells Sigurðr about the norns, saying that there are many, some to the gods, some to elves, and others to dwarfs. Gangleri comments that the norns apportion exceeding unevenly, seeing that some have a pleasant and luxurious life while others have little worldly goods, and some have long life, others short. Hárr replies that "good norns and of honorable race appoint good life; but those men that suffer evil fortunes are governed by evil norns."

Snorri finishes his description of the norns by saying that they dwell by the Urðarbrunnr and that they take water of the well every day, and with it that clay which lies about the well, and sprinkle it over Yggdrasil, so that its limbs shall not wither and rot.

The norns are mentioned in various other eddic poems. Odin says in Sólarljóð that he sat in the Norn's seat for nine days. In Helgakviða Hundingsbana I, stanza 2, the norns came to Helgi's cradle to determine his life, and they decreed him to be a most famous prince and best leader of men.

In Sigurðarkviða Fáfnisbana II, the dwarf Andvari says that "a luckless Norn in times of old decreed, that in water the water I should wade," referring to the fact that he spends his life in the form of a pike. In Sigurðarkviða Fáfnisbana III, Brynhildr laments her separation from Sigurðr, saying "the hateful norns long suffering have decreed us."

In Hamðismál, Sörli says to his brother Hamðir that "no one lives till eve against the norn's decree."