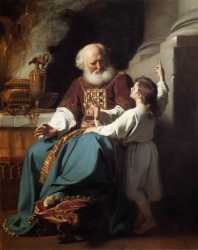 "Ascent." The high priest when the ark was at Shiloh.1 He was the first of the line of Ithamar, Aaron's fourth son,2 who held that office. The office remained in his family till the time of Abiathar,3 whom Solomon deposed, and appointed Zadok, of the family of Eleazar, in his stead.4 He acted also as a civil judge in Israel after the death of Samson,5 and judged Israel for forty years.

His sons Hophni and Phinehas grossly misconducted themselves, to the great disgust of the people.6 They were licentious reprobates. He failed to reprove them so sternly as he ought to have done, and so brought upon his house the judgment of God.7 The Israelites proclaimed war against the Philistines, whose army was encamped at Aphek. The battle, fought a short way beyond Mizpeh, ended in the total defeat of Israel. Four thousand of them fell in "battle array." They now sought safety in having the "ark of the covenant of the Lord" among them. They fetched it from Shiloh, and Hophni and Phinehas accompanied it. This was the first time since the settlement of Israel in Canaan that the ark had been removed from the sanctuary. The Philistines put themselves again in array against Israel, and in the battle which ensued "Israel was smitten, and there was a very great slaughter."

The tidings of this great disaster were speedily conveyed to Shiloh, about 20 miles distant, by a messenger, a Benjamite from the army. There Eli sat outside the gate of the sanctuary by the wayside, anxiously waiting for tidings from the battle-field. The full extent of the national calamity was speedily made known to him: "Israel is fled before the Philistines, there has also been a great slaughter among the people, thy two sons Hophni and Phinehas are dead, and the ark of God is taken."8 When the old man, whose eyes were "stiffened" (i.e., fixed, as of a blind eye unaffected by the light) with age, heard this sad story of woe, he fell backward from off his seat and died, being ninety-eight years old.

For other occurances of the name "Eli", click here.