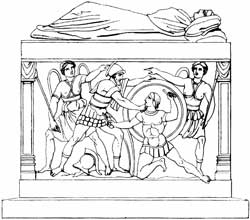 A son of Oedipus and Iocaste. After his father's flight from Thebes, he and his brother Polynices undertook the government of Thebes by turns. But, in consequence of disputes having arisen between the brothers, Polynices fled to Adrastus, who then brought about the expedition of the Seven against Thebes.

When many of the heroes had fallen, Eteocles and Polynices resolved upon deciding the contest by a single combat, but both the brothers fell.

For other occurances of the name "Eteocles", click here.