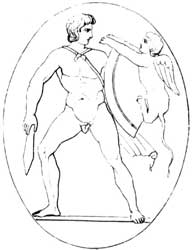 "Swollen-foot." The son of Laius and Iocaste of Thebes. The tragic fate of this hero is more celebrated than that of any other legendary personage, on account of the frequent use which the tragic poets have made of it. In their hands it also underwent various changes and embellishments; but the common story is as follows.

Laius, a son of Labdacus, was king of Thebes, and husband of Iocaste, a daughter of Menoeceus (or Creon1), and sister of Creon. As Laius had no issue, he consulted the oracle, which informed him that if a son should be born to him he would lose his life by the hand of his own child. When, therefore, at length Iocaste gave birth to a son, they pierced his feet, bound them together, and then exposed the child on Mount Cithaeron. There he was found by a shepherd of king Polybus of Corinth, and he was called from his swollen feet Oedipus.

When he was brought to the palace, the king and his wife Merope (or Periboea)2 brought him up as their own child. Once, however, Oedipus was taunted by a Corinthian with not being the king's son, whereupon he proceeded to Delphi to consult the oracle. The answer he there obtained was that he should slay his father and commit incest with his own mother. Thinking that Polybus was his father, he resolved not to return to Corinth; but on his road between Delphi and Daulis he met his real father Laius, and as Polyphontes (or Polyphetes, or Polypoetes),3 the charioteer of Laius, wanted to push him out of the way, a scuffle ensued in which Oedipus slew both Laius and Polyphontes, and one part of the oracle was fulfilled. The two corpses are said to have been buried on the same spot by Damasistratus, king of Plataeae.4

In the mean time the celebrated Sphinx had appeared in the neighborhood of Thebes. She had settled on a rock, and put a riddle to every Theban that passed by, and whoever was unable to solve it was killed by the monster. This calamity induced the Thebans to make known that whoever should deliver the country of it should be made king, and receive Iocaste as his wife. Oedipus was one of those that came forward, and when he approached the Sphinx she gave the riddle as follows; "A being with four feet has two feet and three feet, and only one voice; but its feet vary, and when it has most it is weakest." Oedipus solved the riddle by saying that it was man, and the Sphinx thereupon threw herself from the rock.

Oedipus now obtained the kingdom of Thebes, and married his mother, by whom he became the father of Eteocles, Polynices, Antigone, and Ismene. In consequence of this incestuous alliance of which no one was aware, the country of Thebes was visited by a plague, and the oracle ordered that the murderer of Laius should he expelled. Oedipus accordingly pronounced a solemn curse upon the unknown murderer, and declared him an exile; but when he endeavored to discover him, he was informed by the seer Tiresias that he himself was both the parricide and the husband of his mother. Iocaste now hanged herself, and Oedipus put out his own eyes.5

From this point traditions again differ, for according to some, Oedipus in his blindness was expelled from Thebes by his sons and brother-in-law, Creon, who undertook the government, and he was guided and accompanied by Antigone in his exile to Attica; but according to others he was imprisoned by his sons at Thebes, in order that his disgrace might remain concealed from the eyes of the world. The father now cursed his sons, who agreed to rule over Thebes alternately, but became involved in a dispute, in consequence of which they fought in single combat, and slew each other. Hereupon Creon succeeded to the throne, and expelled Oedipus.

After long wanderings Oedipus arrived in the grove of the Eumenides, near Colonus, in Attica; he was there honored by Theseus in his misfortune, and, according to an oracle, the Eumenides removed him from the earth, and no one was allowed to approach his tomb.6

According to Homer, Oedipus, tormented by the Erinyes of his mother, continued to reign at Thebes after her death; he fell in battle, and was honored at Thebes with funeral solemnities.7

Some traditions mention Eurygeneia as the mother of the four children of Oedipus above-mentioned,8 and previous to his connection with her, he is said to have been the father of Phrastor and Laonytus by Iocaste, and to have in the end married Astymedusa, a daughter of Sthenelus.9 Oedipus himself is sometimes called a son of Laius by Eurycleia, and is said to have been thrown in a chest into the sea when yet an infant, to have been carried by the waves to the coast of Sicyon, to have been received by Polybus, and afterwards to have been blinded by him.10

His tomb was shown at Athens, where he also had an heroum.11

In art, Oedipus is not frequently portrayed. Only the encounter with the Sphinx appears on a few vases. A bowl (first half of the fifth century BCE; Vatican Museum) shows Oedipus, wearing travel cloths, seated on a rock; in a pensive pose, chin in hand, he looks up at the Sphinx seated high on a pillar.