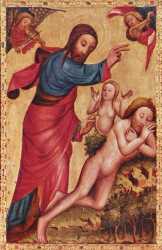 "Living." The name given by Adam to his wife, because she was the "mother of all living."1 She was created by God to keep Adam company in Garden of Eden. The account of her creation is given in Gen. 2:21-22: "God caused a deep sleep to fall upon Adam, and he slept: and he took one of his ribs, and closed up the flesh instead thereof; And the rib, which the Lord God had taken from man, made he a woman."

Through the subtle temptation of the serpent she violated the commandment of God by taking of the forbidden fruit, which she gave also to her husband.2 Their disobedience angers God; he curses the snake, places women under the domination of man, makes man mortal, and expels them from the Garden.3 Their sin would be known as the original sin, of the fall of man.

After their expulsion from Eden, Eve gave birth to their first son, Cain,4 followed by another son, Abel.5 and later Seth,6 "For God, said she, hath appointed me another seed instead of Abel, whom Cain slew." Genesis states that Adam had a number of sons and daughters,7 presumably by Eve.

Eve is known in the Islamic tradition as Adam's wife, although the Qur'an does not specifically name her.