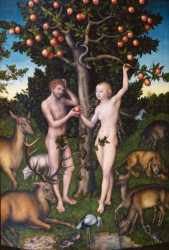 "Red." A Babylonian word, the generic name for "man," having the same meaning in the Hebrew and the Assyrian languages. In the Bible, it is the name given of the first man, whose creation, fall, and subsequent history and that of his descendants are detailed in the first book of Moses.1

Adam was formed out of the dust of the earth (Heb. adamah, אדמה): "And the Lord God formed man of the dust of the ground, and breathed into his nostrils the breath of life; and man became a living soul."2 He was placed after his creation in the Garden of Eden, to cultivate it, and to enjoy its fruits under this one prohibition: "Of the tree of the knowledge of good and evil thou shalt not eat of it; for in the day that thou eatest thereof thou shalt surely die."

The first recorded act of Adam was his giving names to the beasts of the field and the fowls of the air, which God brought to him for this end. Thereafter God caused a deep sleep to fall upon him, and while in an unconscious state took one of his ribs, and closed up his flesh again; and of this rib he made a woman, whom he presented to him when he awoke. Adam received her as his wife, and said, "This is now bone of my bones, and flesh of my flesh: she shall be called Woman, because she was taken out of Man." He called her Eve, because she was the mother of all living.3

Being induced by the tempter in the form of a serpent to eat the forbidden fruit, Eve persuaded Adam, and he also did eat. Their disobedience angers God:

17 And unto Adam he said, Because thou hast hearkened unto the voice of thy wife, and hast eaten of the tree, of which I commanded thee, saying, Thou shalt not eat of it: cursed is the ground for thy sake; in sorrow shalt thou eat of it all the days of thy life;
18 Thorns also and thistles shall it bring forth to thee; and thou shalt eat the herb of the field;
19 In the sweat of thy face shalt thou eat bread, till thou return unto the ground; for out of it wast thou taken: for dust thou art, and unto dust shalt thou return.

They were given clothes of skin, and then driven from Eden. At the east of the garden God placed Cherubim, and a flaming sword, which turned every way, to prevent access to the tree of life.4

Shortly after their expulsion Eve brought forth her firstborn, and called him Cain. Although we have the names of only three of Adam's sons, viz., Cain, Abel, and Seth, he had other several sons and daughters.5 He died aged 930 years.6

The apostle Paul speaks of Adam as "the figure of him who was to come." On this account Jesus is sometimes called the second Adam. This typical relation is described in Rom. 5:14- 19.

For other occurances of the name "Adam", click here.