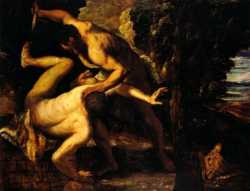 "Breath", "Vanity." The second son of Adam and Eve, and brother of Cain.1 Guided by the instruction of their father, the two brothers were trained in the duty of worshiping God. "And in process of time" (marg. "at the end of days", i.e., on the Sabbath) each of them offered up to God of the first-fruits of his labors. Cain, as a husbandman, offered the fruits of the field; Abel, as a shepherd, of the firstlings of his flock. "The Lord had respect unto Abel and his offering; but unto Cain and his offering he had not respect."2 On this account Cain was angry with his brother, and when they were in the field, Cain rose up against Abel, and slew him.3

There are several references to Abel in the New Testament. Jesus speaks of him as "righteous."4 "The blood of sprinkling" is said to speak "better things than that of Abel";5 i.e., the blood of Jesus is the reality of which the blood of the offering made by Abel was only the type. It is also said6 that "By faith Abel offered unto God a more excellent sacrifice than Cain, by which he obtained witness that he was righteous, God testifying of his gifts."

In the Islamic tradition he is called Hābīl.