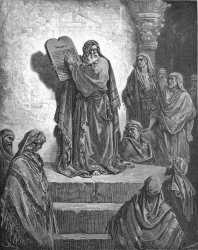 "Help." The "scribe" who led the second body of exiles that returned from Babylon to Jerusalem, and author of the book of Scripture which bears his name. He was the son, or perhaps grandson, of Seraiah,1 and a lineal descendant of Phinehas, the son of Aaron.2 All we know of his personal history is contained in the last four chapters of his book, and in Neh. 8 and 12:26.

In the seventh year of the reign of Artaxerxes I of Persia, he obtained leave to go up to Jerusalem and to take with him a company of Israelites.3 Artaxerxes manifested great interest in Ezra's undertaking, granting him "all his request," and loading him with gifts for the house of God. Ezra assembled a large band of exiles, who were prepared to go up with him to Jerusalem, on the banks of the Ahava, where they rested for three days, and were put into order for their march across the desert, which was completed in four months. His proceedings at Jerusalem on his arrival there are recorded in his book. It appears that Ezra's great design was to effect a religious reformation among the Palestine Jews. His first step was to enforce separation upon all who had married foreign wives.4 This was effected in little more than six months after his arrival at Jerusalem.

For about fourteen years, we have no record of what went on in Jerusalem after Ezra had set in order the ecclesiastical and civil affairs of the nation. In that year another distinguished personage, Nehemiah, appears on the scene. After the ruined wall of the city had been built by Nehemiah, there was a great gathering of the people at Jerusalem preparatory to the dedication of the wall. On the appointed day the whole population assembled, and the law was read aloud to them by Ezra and his assistants.5 For successive days they held solemn assemblies, confessing their sins and offering up solemn sacrifices. They kept also the feast of Tabernacles, and then renewed their national covenant to be the Lord's. Abuses were rectified, and arrangements for the temple service completed, and now nothing remained but the dedication of the walls of the city.6

The date of his death is uncertain. There was a Jewish tradition that he was buried in Persia.