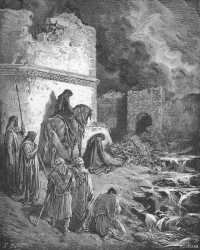 "Comforted by Yahweh." The son of Hachaliah,1 and probably of the tribe of Judah. His family must have belonged to Jerusalem.2 He was one of the "Jews of the dispersion," and in his youth was appointed to the important office of royal cup-bearer at the palace of Susa.

The king, Artaxerxes I, seems to have been on terms of friendly familiarity with his attendant. Through his brother Hanani, and perhaps from other sources,3 he heard of the mournful and desolate condition of the Holy City, and was filled with sadness of heart. For many days he fasted and mourned and prayed for the place of his fathers' sepulchers. At length the king observed his sadness of countenance and asked the reason of it. Nehemiah explained it all to the king, and obtained his permission to go up to Jerusalem and there to act as tirshatha, or governor of Judea.

He went to Jerusalem with a strong escort supplied by the king, and with letters to all the pashas of the provinces through which he had to pass, as also to Asaph, keeper of the royal forests, directing him to assist Nehemiah. On his arrival he set himself to survey the city, and to form a plan for its restoration; a plan which he carried out with great skill and energy, so that the whole was completed in about six months.

He remained in Judea for thirteen years as governor, carrying out many reforms, notwithstanding much opposition that he encountered.4 He built up the state on the old lines, "supplementing and completing the work of Ezra," and making all arrangements for the safety and good government of the city. At the close of this important period of his public life, he returned to Persia to the service of his royal master at Susa or Ecbatana.

Very soon after this the old corrupt state of things returned, showing the worthlessness to a large extent of the professions that had been made at the feast of the dedication of the walls of the city.5 The prophet Malachi now appeared among the people with words of stern reproof and solemn warning; and Nehemiah again returned from Persia (after an absence of some two years), and was grieved to see the widespread moral degeneracy that had taken place during his absence. He set himself with vigor to rectify the flagrant abuses that had sprung up, and restored the orderly administration of public worship and the outward observance of the law of Moses.

Of his subsequent history we know nothing. Probably he remained at his post as governor till his death. The place of his death and burial is, however, unknown.

Nehemiah was the last of the governors sent from the Persian court. Judea after this was annexed to the satrapy of Coele-Syria, and was governed by the high priest under the jurisdiction of the governor of Syria, and the internal government of the country became more and more a hierarchy.

The Book of Nehemiah consists of four parts:

It is also the name of an assistant wall-builder.10

In the Septuagint, the Greek version of the Hebrew Bible, he is described as eunochos, "eunuch," rather than oinochoos, "wine-cup-bearer."