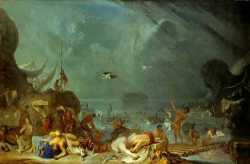 The Flood or the Deluge, the name given to Noah's flood, the narrative of which is recorded in Gen. 7 and 8.

The cause of this judgment was the corruption and violence that filled the earth in the ninth generation from Adam, and God resolved to destroy it. "And the Lord said, I will destroy man whom I have created from the face of the earth; both man, and beast, and the creeping thing, and the fowls of the air; for it repenteth me that I have made them." Only Noah "found grace in the eyes of Lord." At the command of God, Noah made an ark of gopher wood 300 cubits long, 50 cubits broad, and 30 cubit high. He slowly proceeded with this work during a period of about one hundred years.1 At length the purpose of God began to be carried into effect. The order of events as stated in the Bible:

The narrative of the Flood is referenced to by Jesus.12 It is also spoken of by Peter.13 In Isa. 54:9 the Flood is referred to as "the waters of Noah." According to the biblical narrative, the Flood swept away all men living except Noah and his family and the animals they gathered, who were preserved in the ark, and the present human race is descended from those who were thus preserved. It lasted for twelve months and ten days.

For other occurances of the name "Flood", click here.