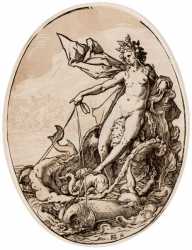 "Milk-white." A Nereid, daughter of Nereus and Doris, and beloved by Polyphemus. She herself was in love with the beautiful youth Acis. When Polyphemus crushed Acis beneath a rock in a fit of jealousy, she threw herself into the sea where she joined her sisters.

According to a later tradition Galatea eventually yielded to Polyphemus' embraces. Their son, Galas or Galates, became the ancestor of the Gauls.

The woman Galatea who was beloved by the sculptor Pygmalion is a different person.

Carlo Maratti (1625-1713) depicted Galatea in the sea and Polypheme sitting on a rock. Händel has an opera named Acis and Galatea (1720).

For other occurances of the name "Galatea", click here.