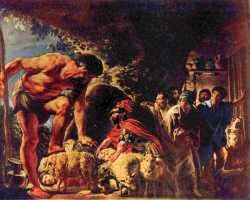 The son of Poseidon and Thoosa. Polyphemus was the greatest among the Cyclopes. When Odysseus arrived on Sicily during his voyage, Polyphemus locked him and his companions in a cave and devoured six of them. Odysseus contrived to blind the giant's single eye, and make good his escape with the rest of his men. The maddened Polyphemus called upon them the wrath of his father Poseidon, and Odysseus' further voyage was hampered by storms.

In Ovid's Metamorphoses,1 Polyphemus falls in love with the Nereid Galatea, but she does not reciprocate. Instead, she chooses the beautiful shepherd Acis, whereupon the jealous Cyclops crushes his rival beneath a rock. In Theocritus2 he appears as a gentle shepherd in love with Galatea, finding solace in song.

On ancient Greek ceramics, the blinding of Polyphemus was a favorite theme: the Cyclops is a naked, bearded giant with satyr's ears, and a number of men are on the verge of thrusting a sharpened pole into his single eye. Such a scene can be found on a krater by Aristonothus (seventh century BCE; Rome). On a Laconian kylix (ca. 550 BCE; Paris), Odysseus offers a pitcher of wine to Polyphemus who still holds the limbs of the men he ate in his hand.

His love for Galatea is depicted on several murals, such as at the Casa del Sacerdote Amando at Pompeii. Galatea is seated on a dolphin while Polyphemus, who is represented here as a shepherd, watches her. A fresco at the house of Augustus on the Palatine at Rome (the Casa di Livia) shows Polyphemus standing up to his chest in the water, lovingly gazing at Galatea who is passing-by on a sea horse. Two other nymphs are in attendance and a small Amor is standing on the shoulder of the Cyclops, holding reins which are looped around his neck.

For other occurances of the name "Polyphemus", click here.