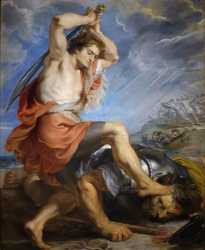 "Great." A famous giant of Gath, who for forty days openly defied the armies of Israel, but was at length slain by David with a stone from a sling.1 David cut off his head2 and brought it to Jerusalem, while he hung the armor which he took from him in his tent. His sword was preserved at Nob as a religious trophy.3 David's victory over Goliath was the turning point in his life. He came into public notice now as the deliverer of Israel and the chief among Saul's men of war,4 and the devoted friend of Jonathan.

Goliath is called Jalut in the Qur'an.7

2 Sam. 21:19 mentions how "Elhanan the son of Jaareoregim, the Bethlehemite, slew Goliath the Gittite, the shaft of whose spear was like a weaver's beam."