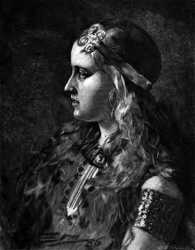 "War-invitation." The daughter of Suttungr, a jötunn. He father charged her with guarding the mead of poetry, which he had placed in a chamber called Hnitbjörg inside a mountain. Odin, in his guise as Bölverkr, managed to gain access to the room. He lay with her three nights, and then she gave him leave to drink three sips of the mead; instead, he drank every drop of the three containers, turned himself into an eagle, and flew away.

The story is alluded to in the poem Hávamál, which differs in a number of details. Here, Gunnlöð is simply presented as another of Odin's sexual conquests:

106. Gunnlöd gave me,
on her golden seat,
a draught of the precious mead;
a bad recompense
I afterwards made her,
for her whole soul,
her fervent love.

109. 'Tis to me doubtful
that I could have come
from the Jötun's courts,
had not Gunnlöd aided me,
that good damsel,
over whom I laid my arm.

111. Odin, I believe,
a ring-oath gave.
Who in his faith will trust?
Suttung defrauded,
of his drink bereft,
and Gunnlöd made to weep!