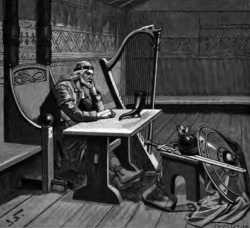 A son of Gjúki and Grímhildr, and the brother of Högni, Guðrún, and Guthormr, Gjúki's stepson. Sigurðr married Guðrún, and Gunnarr and Högni swore oaths of blood brotherhood with him.

Grímhildr counseled her son to woo Brynhildr. The latter had vowed to wed that man only who should ride over the blazing fire that was laid around her hall. Gunnarr, Högni, and Sigurðr found the hall, but Gunnarr's horse is unwilling to leap the fire. He borrows Sigurðr's horse Grani, but that horse too would not go over, whereupon he and Sigurðr decide to change forms. Sigurðr runs his horse through the fire and inside finds Brynhildr sitting in a chair. She asks who he is and he calls himself Gunnarr, Gjúki's son, and claims her as his wife. He tarried there three nights, and they prepared one bed but he laid his sword Gramr between them. Afterwards he and Gunnarr return home, while Brynhildr goes to the dwelling of her brother-in-law, Heimir, and makes ready for her marriage with Gunnar.

After her marriage to Gunnarr, Guðrún betrays the fact that it was Sigurðr, and not Gunnarr, who rode through the flames. The men try to appease Brynhildr but in vain. Brynhildr then tells Gunnar that she had given herself wholly to Sigurðr before she had become Gunnar's wife,1 and Gunnar discusses plans of vengeance with his brother, Högni. Since they had sworn oaths with Sigurðr, they instead incite their stepbrother Guthormr to kill Sigurðr.

Gunnarr and Högni then take all the gold, Fáfnir's heritage. Atli, the king of the Huns, blames the Gjúkings for the death of his sister Brynhildr. By way of reconciliation it is agreed that they should give him their sister Guðrún in marriage. Atli invites them to his home. Gunnarr seeks the hand of Atli's sister Oddrún, but does not obtain it, and marries Glaumvör instead. Both brothers are later captured and murdered by Atli: Högni has his heart cut out, and Gunnarr is cast into a den of serpents. Guðrún gives him a harp with which he lulls the serpents, but an adder gnaws into the cartilage of his breast-bone so far that her head sink within the wound, and cleaves to his liver till he died.

1. There is a confusion between two traditions, and in Helreið Brynhildar she confesses that this accusation is false.