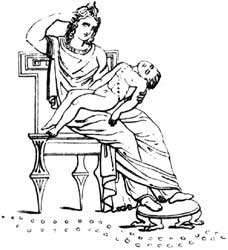 A daughter of Dymas in Phrygia, and second wife of Priam, king of Troy.1 Some described her as a daughter of Cisseus, or the Phrygian river god Sangarius and Metope.2

According to the tragedy of Euripides, which bears her name, she was made a slave by the Greeks on their taking Troy, and was carried by them to Chersonesus; and she there saw her daughter Polyxena sacrificed. On the same day the waves of the sea washed the body of her last son Polydorus on the coast where stood the tents in which the captive women were kept. Hecabe recognized the body, and sent for Polymestor, who had murdered him, pretending that she was going to inform him of a treasure which was concealed at Ilium.

When Polymestor arrived with his two sons, Hecabe murdered the children, and tore out the eyes of Polymestor. Agamemnon pardoned her for the crime, and Polymestor prophesied to her that she should be metamorphosed into a she-dog, and should leap into the sea at a place called Cynosema.3 According to Ovid,4 this prophecy was fulfilled in Thrace, the inhabitants of which stoned her; but she was metamorphosed into a dog, and in this form she howled through the country for a long time.5

According to other accounts she was given as a slave to Odysseus, and in despair she leaped into the Hellespont,6 or being anxious to die, she uttered such invectives against the Greeks, that the warriors put her to death, and called the place where she was buried κυνὸς σῆμα (kynos sēma), with reference to her impudent invectives.7 Respecting her children by Priam, see Apollodorus.8

On Greek vases, Hecuba is portrayed as a beautiful young women in various scenes relating to the Trojan War. A fresco in the Casa di Ceciio Iucundo at Pompeii depicts her with a sorrowful look on her face, looking down from a window upon the procession returning with Hector's body.