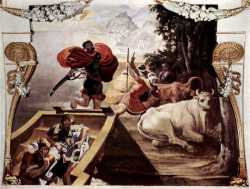 That is, the sun, or the god of the sun. He is described as the son of Hyperion and Theia, and as a brother of Selene and Eos.1 From his father, he is frequently called Hyperionides, or Hyperion, the latter of which is an abridged form of the patronymic, Hyperionion.2 In the Homeric hymn on Helios, he is called a son of Hyperion and Euryphaessa. Homer describes Helios as giving light both to gods and men: he rises in the east from Oceanus, though not from the river, but from some lake or bog (λίμνη, limnē) formed by Oceanus, rises up into heaven, where he reaches the highest point at noon time, and then he descends, arriving in the evening in the darkness of the west, and in Oceanus.3

Later poets have marvelously embellished this simple notion: they tell of a most magnificent palace of Helios in the east, containing a throne occupied by the god, and surrounded by personifications of the different divisions of time;4 and while Homer speaks only of the gates of Helios in the west, later writers assign to him a second palace in the west, and describe his horses as feeding upon herbs growing in the islands of the blessed.5

The points at which Helios rises and descends into the ocean are of course different at the different seasons of the year; and the extreme points in the north and south, between which the rising and setting take place, are the τροπαὶ ἠελίοιο (tropai ēelioio).6 The manner in which Helios during the night passes from the western into the eastern ocean is not mentioned either by Homer or Hesiod, but later poets make him sail in a golden boat round one-half of the earth, and thus arrive in the east at the point from which he has to rise again. This golden boat is the work of Hephaestus.7 Others represent him as making his nightly voyage while slumbering in a golden bed.8 The horses and chariot with which Helios makes his daily career are not mentioned in the Iliad and Odyssey, but first occur in the Homeric hymn on Helios,9 and both are described minutely by later poets.10

Helios is described even in the Homeric poems as the god who sees and hears every thing, but, notwithstanding this, he is unaware of the fact that the companions of Odysseus robbed his oxen, until he was informed of it by Lampetia.11 But, owing to his omniscience, he was able to betray to Hephaestus the faithlessness of Aphrodite, and to reveal to Demeter the carrying off of her daughter.12 This idea of Helios knowing every thing, which also contains the elements of his ethical and prophetic nature, seems to have been the cause of Helios being confounded and identified with Apollo, though they were originally quite distinct; and the identification was, in fact, never carried out completely, for no Greek poet ever made Apollo ride in the chariot of Helios through the heavens, and among the Romans we find this idea only after the time of Virgil. The representations of Apollo with rays around his head, to characterize him as identical with the sun, belong to the time of the Roman empire.

The island of Thrinacia (Sicily) was sacred to Helios, and he there had flocks of oxen and sheep, each consisting of 350 heads, which never increased or decreased, and were attended to by his daughters Phaethusa and Lampetia.13 Later traditions ascribe to him flocks also in the island of Erytheia,14 and it may be remarked in general, that sacred flocks, especially of oxen, occur in most places where the worship of Helios was established. His descendants are very numerous, and the surnames and epithets given him by the poets are mostly descriptive of his character as the sun.

Temples of Helios (ήλιεῖα, ēlieia) seem to have existed in Greece at a very early time,15 and in later times we find his worship established in various places, as in Elis,16 at Apollonia,17 Hermione,18 in the acropolis of Corinth,19 near Argos,20 at Troezen,21 Megalopolis,22 and several other places, especially in the island of Rhodes, where the famous colossus of Rhodes was a representation of Helios: it was 70 cubits in height, and, being overthrown by an earthquake, the Rhodians were commanded by an oracle not to erect it again.23

The sacrifices offered to Helios consisted of white rams, boars, bulls, goats, lambs, especially white horses, and honey.24 Among the animals sacred to him, the cock is especially mentioned.25

The Roman poets, when speaking of the god of the sun (Sol), usually adopt the notions of the Greeks, but the worship of Sol was introduced also at Rome, especially after the Romans had become acquainted with the East, though traces of the worship of the sun and moon occur at a very early period.26

Helios was represented on the pedestal of the Olympian Zeus, in the act of ascending his chariot,27 and several statutes of him are mentioned;28 he was also represented riding in his chariot, drawn by four horses.29 A metope from the temple of Athena at the Hellenic Ilum depicts him with a billowing cloak and an aureole around the head, standing in the solar chariot. The god also appears on many later reliefs which are related to the worship of Mithra, such as in the Mithraeum beneath the Santa Prisca at Rome. In early Christian art Christ is occasionally portrayed as Helios, for example on a mosaic in the Mausoleum M or "of the fisher" in the necropolis beneath the St. Peter at Rome.