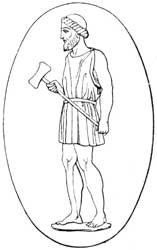 The god of fire, was, according to the Homeric account, the son of Zeus and Hera.1 Later traditions state that he had no father, and that Hera gave birth to him independent of Zeus, as she was jealous of Zeus having given birth to Athena independent of her.2 This, however, is opposed to the common story, that Hephaestus split the head of Zeus, and thus assisted him in giving birth to Athena, for Hephaestus is there represented as older than Athena. A further development of the later tradition is, that Hephaestus sprang from the thigh of Hera, and, being for a long time kept in ignorance of his parentage, he at length had recourse to a stratagem, for the purpose of finding it out. He constructed a chair, to which those who sat upon it were fastened, and having thus entrapped Hera, he refused allowing her to rise until she had told him who his parents were.3 For other accounts respecting his origin, see Cicero,4 Pausanias,5 and Eustathius.6

Hephaestus is the god of fire, especially in so far as it manifests itself as a power of physical nature in volcanic districts, and in so far as it is the indispensable means in arts and manufactures, whence fire is called the breath of Hephaestus, and the name of the god is used both by Greek and Roman poets as synonymous with fire. As a flame arises out of a little spark, so the god of fire was delicate and weakly from his birth, for which reason he was so much disliked by his mother, that she wished to get rid of him, and dropped him from Olympus. But the marine divinities, Thetis and Eurynome, received him, and he dwelt with them for nine years in a grotto, surrounded by Oceanus, making for them a variety of ornaments.7 It was, according to some accounts, during this period that he made the golden chair by which he punished his mother for her want of affection, and from which he would not release her, till he was prevailed upon by Dionysus.8

Although Hephaestus afterwards remembered the cruelty of his mother, yet he was always kind and obedient towards her. Once, while she was quarreling with Zeus, he took her part, and thereby offended his father so much, that he seized him by the leg, and hurled him down from Olympus. Hephaestus was a whole day falling, but in the evening he came down in the island of Lemnos, where he was kindly received by the Sintians.9

Later writers describe his lameness as the consequence of his second fall, while Homer makes him lame and weak from his birth. After his second fall he returned to Olympus, and subsequently acted the part of mediator between his parents.10 On that occasion he offered a cup of nectar to his mother and the other gods, who burst out into immoderate laughter on seeing him busily hobbling through Olympus from one god to another, for he was ugly and slow, and, owing to the weakness of his legs, he was held up, when he walked, by artificial supports, skilfully made of gold.11 His neck and chest, however, were strong and muscular.12

In Olympus, Hephaestus had his own palace, imperishable and shining like stars: it contained his workshop, with the anvil, and twenty bellows, which worked spontaneously at his bidding.13 It was there that he made all his beautiful and marvelous works, utensils, and arms, both for gods and men. The ancient poets and mythographers abound in passages describing works of exquisite workmanship which had been manufactured by Hephaestus. In later accounts, the Cyclopes — Brontes, Steropes, Pyracmon, and others — are his workmen and servants, and his workshop is no longer represented as in Olympus, but in the interior of some volcanic isle.14

The wife of Hephaestus also lived in his palace: in the Iliad she is called Charis, in the Odyssey Aphrodite,15 and in Hesiod's Theogony16 she is named Aglaea, the youngest of the Charites. The story of Aphrodite's faithlessness to her husband, and of the manner in which he surprised her, is exquisitely described in Odyssey.17 The Homeric poems do not mention any descendants of Hephaestus, but in later writers the number of his children is considerable. In the Trojan war he was on the side of the Greeks, but he was also worshiped by the Trojans, and on one occasion he saved a Trojan from being killed by Diomedes.18

His favorite place on earth was the island of Lemnos, where he liked to dwell among the Sintians;19 but other volcanic islands also, such as Lipara, Hiera, Imbros, and Sicily, are called his abodes or workshops.20

Hephaestus is among the male what Athena is among the female deities, for, like her, he give skill to mortal artists, and, conjointly with her, he was believed to have taught men the arts which embellish and adorn life.21 But he was, nevertheless, conceived as far inferior to the sublime character of Athena. At Athens they had temples and festivals in common.22 Both also were believed to have great healing powers, and Lemnian earth (terra Lemnia) from the spot on which Hephaestus had fallen was believed to cure madness, the bites of snakes, and hemorrhage, and the priests of the god knew how to cure wounds inflicted by snakes.23

The epithets and surnames by which Hephaestus is designated by the poets generally allude to his skill in the plastic arts or to his figure and his lameness.

The Romans, when speaking of the Greek Hephaestus, call him Vulcanus, although Vulcanus was an original Italian divinity.

Hephaestus was represented in the temple of Athena Chalcioecus at Sparta, in the act of delivering his mother;24 on the chest of Cypselus, giving to Thetis the armor for Achilles;25 and at Athens there was the famous statue of Hephaestus by Alcamenes, in which his lameness was slightly indicated (the so-called Theseion; ca. 420 BCE).26 The Greeks frequently placed small dwarf-like statues of the god near the hearth, and these dwarfish figures seem to have been the most ancient.27

During the best period of Grecian art, he was represented as a vigorous man with a beard, and is characterized by his hammer or some other instrument, his oval cap, and the chiton, which leaves the right shoulder and arm uncovered.28 He appears frequently on vases: on the François vase his return to Olympus is depicted. As the lame god he is shown in relief on the frieze in the treasury of the Siphnians (Delphi, sixth century BCE).