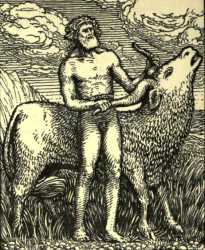 "Heaven-destroyer." The huge ox that belonged to the jötunn Hymir. During his visit to the giant, Thor ate so much that Hymir said that the next night they would have to live on what they caught. Thor said that he would row out to sea if the giant would supply him with bait. He was told to take his bait from Hymir's herd. Thor went to the forest where he came upon an all-black ox, the largest of the herd. He took hold of Himinhrjód's horns and tore off the head.

At sea, he attached the head to his hook and cast it overboard. The earth-encircling serpent, Jörmungandr, snapped at the bait and the hook caught in its jaw. Thor drew the serpent up and hit it with his hammer until it broke loose and sank back into the ocean. The story is told with variations in Gylfaginning.