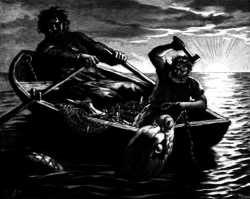 A jötunn. According to the eddic poem Hymiskviða, the "Lay of Hymir," he was the father of the god Týr, and the owner of huge brewing-cauldron, a mile in depth. He dwelt to the east of Élivágar. He is described as a wise, yet evil-natured giant, cold-hearted, often churlish towards guests, and with a foul temper.

The poem recounts how Thor and Týr set out to obtain the cauldron for the sea-giant Ægir to enable him to brew ale for the Æsir. They went to the home of Hymir and were welcomed there by his wife, Týr's mother. Hymir was not pleased when he saw his guests but still ordered three bulls to be fetched and cooked. Before he went to sleep, Thor devoured two all by himself.

The next morning Thor wanted to go fishing, if the giant would provide him with bait. He was told to fetch bait himself, if he dared, and so Thor went to the forest where he came upon a huge ox, as black as pitch, called Himinhrjód, and tore off the animal's head.

Thor and the giant set out to sea and Hymir soon had caught two wales with his hook. Thor made himself a fishing-line and baited it with the head of the ox. From below, the one whom the gods hate, the Midgard Serpent, opened his maw wide at the bait. Thor drew the serpent up to the side and struck it with his hammer. The monster roared and the whole earth shuddered, until the creature broke free and sank back into the sea. They rowed back to shore and the giant asked Thor to share the work equally, either carry the wales or secure the boat. Thor hauled the boat ashore and then carried the wales to the giant's home.

Although the giant was impressed with Thor's strength, he said that a bit of vigorous rowing was no proof of a man's might, unless he could break his crystal goblet. As soon as he had it in his hand, Thor flung it at the wall, then hurled it at the columns, but it was returned in one piece to Hymir. The giant's fair wife told him to strike it against her husband's head while he is weary with food, for his skull is harder than any crystal goblet. This Thor did, and the goblet shattered into pieces.

Hymir gave Thor and Týr his cauldron, lamenting its loss. Thor seized the huge cauldron by the rim, and his feet sunk right through the floor of the hall. He heaved it upon his head and the handles banged against his heels. They set out and when they had walked quite a while, they noticed a troop of multi-headed warriors emerging from Hymir's rocky lair. Wielding the murderous hammer Mjöllnir, Thor slew every single one.

In the poem Thor is variously called Hlórriði and Véurr.

The story is also told Snorri Sturluson in Gylfaginning, but with different details. Here Thor sets out over Miðgarðr in a hurry, without his chariot and he-goats and no retinue. There is no mention of Týr or a cauldron:

He went out over Midgard in the guise of a young lad, and came one evening at twilight to a certain giant's, who was called Hymir. Thor abode as guest there overnight; but at dawn Hymir arose and clothed himself and made ready to row to sea a-fishing. Then Thor sprang up and was speedily ready, and asked Hymir to let him row to sea with him. But Hymir said that Thor would be of little help to him, being so small and a youth, 'And thou wilt freeze, if I stay so long and so far out as I am wont.' But Thor said that he would be able to row far out from land, for the reason that it was not certain whether he would be the first to ask to row back. Thor became so enraged at the giant that he was forthwith ready to let his hammer crash against him; but he forced himself to forbear, since he purposed to try his strength in another quarter. He asked Hymir what they should have for bait, but Hymir bade him get bait for himself. Then Thor turned away thither where he, saw a certain herd of oxen, which Hymir owned; he took the largest ox, called Himinbrjotr, and cut off its head and went therewith to the sea. By that time Hymir had shoved out the boat.

Thor went aboard the skiff and sat down in the stern-seat, took two oars and rowed; and it seemed to Hymir that swift progress came of his rowing. Hymir rowed forward in the bow, and the rowing proceeded rapidly; then Hymir said that they had arrived at those fishing-banks where he was wont to anchor and angle for flat-fish. But Thor said that he desired to row much further, and they took a sharp pull; then Hymir said that they had come so far that it was perilous to abide out farther because of the Midgard Serpent. Thor replied that they would row a while yet, and so he did; but Hymir was then sore afraid. Now as soon as Thor had laid by the oars, he made ready a very strong fishing-line, and the hook was no less large and strong. Then Thor put the ox-head on the hook and cast it overboard, and the hook went to the bottom; and it is telling thee the truth to say that then Thor beguiled the Midgard Serpent no less than Útgarda-Loki had mocked Thor, at the time when he lifted up the Serpent in his hand.

The Midgard Serpent snapped at the ox-head, and the hook caught in its jaw; but when the Serpent was aware of this, it dashed away so fiercely that both Thor's fists crashed against the gunwale. Then Thor was angered, and took upon him his divine strength, braced his feet so strongly that he plunged through the ship with both feet, and dashed his feet against the bottom; then he drew the Serpent up to the gunwale. And it may be said that no one has seen very fearful sights who might not see that: bow Thor flashed fiery glances at the Serpent, and the Serpent in turn stared up toward him from below and blew venom. Then, it is said, the giant Hymir grew pale, became yellow, and was sore afraid, when he saw the Serpent, and how the sea rushed out and in through the boat. In the very moment when Thor clutched his hammer and raised it on high, then the giant fumbled for his fish-knife and hacked off Thor's line at the gunwale, and the Serpent sank down into the sea. Thor hurled his hammer after it; and men say that he struck off its head against the bottom; but I think it were true to tell thee that the Midgard Serpent yet lives and lies in the encompassing sea. But 'Thor swung his fist and brought it against Hymir's ear, so that he plunged overboard, and Thor saw the soles of his feet. And Thor waded to land.

In Lokasenna, Loki says that Hymir's maidens (i.e., giantesses) used Njörðr for a urinal, and relieved themselves in his mouth.

The fishing scene in which Thor and Hymir try to catch the Midgard Serpent is often featured on stone carvings.