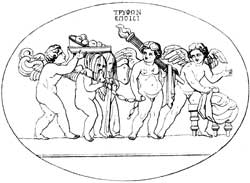 Or Hymeneus (Ὑμέναιος), the god of marriage, was conceived as a handsome youth, and invoked in the hymeneal or bridal song. The names originally designated the bridal song itself, which was subsequently personified. The first trace of this personification occurs in Euripides,1 or perhaps in Sappho.2

The poetical origin of the god Hymen or Hymenaeus is also implied in the fact of his being described as the son of Apollo and a Muse, either Calliope, Urania, or Terpsichore.3 Hence he is mentioned along with the sons of the Muses, Linus and Ialemus, and with Orpheus. Others describe him only as the favorite of Apollo or Thamyris, and call him a son of Magnes and Calliope, or of Dionysus and Aphrodite.4 The ancient traditions, instead of regarding the god as a personification of the hymeneal song, speak of him as originally a mortal, respecting whom various legends were related.

According to an Argive tradition, Hymenaeus was a youth of Argos, who, while sailing along the coast of Attica, delivered a number of Attic maidens from the violence of some Pelasgian pirates, and was afterwards praised by them in their bridal songs, which were called, after him, hymeneal songs.5 The Attic legends described him as a youth of such delicate beauty, that he might be taken for a girl. He fell in love with a maiden, who refused to listen to him; but in the disguise of a girl he followed her to Eleusis to the festival of Demeter. He, together with the other girls, was carried off by robbers into a distant and desolate country. On their landing, the robbers laid down to sleep, and were killed by Hymenaeus, who now returned to Athens, requesting the citizens to give him his beloved in marriage, if he restored to them the maidens who had been carried off by the robbers. His request was granted, and his marriage was extremely happy. For this reason he was invoked in the hymeneal songs.6

According to others he was a youth, and was killed by the breaking down of his house on his wedding-day whence he was afterwards invoked in bridal songs, in order to be propitiated;7 and some related that at the wedding of Dionysus and Ariadne he sang the bridal hymn, but lost his voice.8 According to the Orphic legends, the deceased Hymenaeus was called to life again by Asclepius.9

He is represented in works of art as a (winged) youth, but taller and with a more serious expression than Eros, and carrying in his hand a bridal torch.