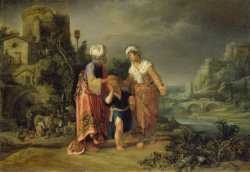 "God hears." Abraham's eldest son, by Hagar the concubine.1 He was born at Mamre, when Abraham was eighty-six years of age, eleven years after his arrival in Canaan.2 At the age of thirteen he was circumcised.3 With the institution of the covenant, God renewed his promise respecting Ishmael. He does not again appear in the narrative until the weaning of Isaac, where his rude and wayward spirit broke out in expressions of insult and mockery;4 and Sarah, discovering this, said to Abraham, "Expel this slave and her son." Comforted by the renewal of God's promise to make of Ishmael a great nation, Abraham dismissed Hagar and her son with no more than a skin of water and some bread.5

Ishmael settled in the land of Paran, a region lying between Canaan and the mountains of Sinai; and "God was with him, and he became a great archer."6 He became a great desert chief, but of his history little is recorded. He was about ninety years of age when his father Abraham died, in connection with whose burial he once more for a moment reappears. On this occasion the two brothers met after being long separated.7 Of the after events of his life but little is known. He died at the age of one hundred and thirty-seven years, but where and when are unknown.8 He had twelve sons by an Egyptian wife, who became the founders of so many Arab tribes or colonies, the Ishmaelites, who spread over the wide desert spaces of Northern Arabia from the Red Sea to the Euphrates.9