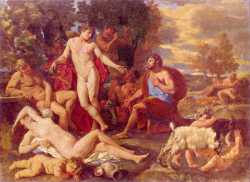 A son of Gordius, according to some by Cybele,1 a wealthy but effeminate king of Phrygia, a pupil of Orpheus, and a promoter of the worship of Dionysus.2 His wealth is alluded to in a story connected with his childhood, for it is said that while yet a child, ants carried grains of wheat into his mouth to indicate that one day he should be the richest of all mortals.3 His effeminacy is described by Philostratus.4

It seems probable that in this character he was introduced into the Satyric drama of the Greeks, and was represented with the ears of a satyr, which were afterwards lengthened into the ears of an ass. He is said to have built the town of Ancyra,5 and as king of Phrygia he is called Berecynthius heros.6

In reference to his later life we have several legends, the first of which relates his reception of Silenus. During the expedition of Dionysus from Thrace to Phrygia, Silenus in a state of intoxication had gone astray, and was caught by country people in the rose gardens of Midas. He was bound in wreaths of flowers and led before the king. These gardens were in Macedonia, near Mount Bermion or Bromion, where Midas was king of the Briges, with whom he afterwards emigrated to Asia, where their name was changed into Phryges.7

Midas received Silenus kindly, conversed with him,8 and after having treated him hospitably for ten days, he led him back to his divine pupil, Dionysus, who in his gratitude requested Midas to ask a favor. Midas in his folly desired that all things which he touched should be changed into gold.9 The request was granted, but as even the food which he touched was changed into gold, he implored the god to take his favor back. Dionysus accordingly ordered him to bathe in the source of Pactolus near Mount Tmolus. This bath saved Midas, but the river from that time had an abundance of gold in its sand.10

A second story relates his capture of Satyrus. Midas, who was himself related to the race of satyrs, once had a visit from a satyr, who indulged in all kinds of jokes, and ridiculed the king for his satyr's ears. Midas, who had learned from his mother how satyrs might he caught and brought to reason, mixed wine in a well, and when the satyr had drunk of it, he fell asleep and was caught.11 This well of Midas was at different times assigned to different localities. Xenophon12 places it in the neighborhood of Thymbrium and Tyraeum, and Pausanias13 at Ancyra.14

Once when Pan and Apollo were engaged in a musical contest on the flute and lyre, Tmolus, or according to others,15 Midas, was chosen to decide between them. Tmolus decided in favor of Apollo, and all agreed in it except Midas. To punish him for this, Apollo changed his ears into those of an ass. Midas contrived to conceal them under his Phrygian cap, but the servant who used to cut his hair discovered them. The secret so much harassed this man, that as he could not betray it to a human being, he dug a hole in the earth, and whispered into it, "King Midas has ass's ears." He then filled the hole up again, and his heart was released. But on the same spot a reed grew up, which in its whispers betrayed the secret to the world.16 Midas is said to have killed himself by drinking the blood of an ox.17

Midas is seldom depicted in antiquity. The musical contest however, was a favorite subject among baroque and Renaissance painters.